The Nile Research Center is determined to research key aspects of the Nyabarongo river and the Nile. Rwanda and the region of the larger lakes is gaining increased levels of interest, both from the public and the private sectors. Understanding the climate, pollution and inhabitants of the river is crucial in developing this region. 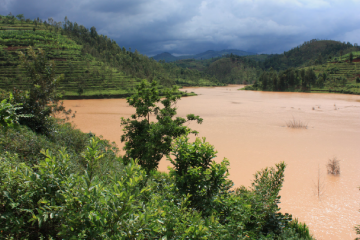 The Research Center aims to generate knowledge on the interaction between the river Nile and its inhabitants. A thorough and interdisciplinary research objective is required. There are a lot of opportunities for collaboration with local and global institutions. Four main topics for research are distinguished.

Climate change is one of the major challenges of this era, impacting us all on a global level. Water is considered the wolrd’s most important natural resource. Climate change has a serious impact on the Nyabarongo river, which acts as a natural buffer.

In-depth research on the role of this river in the context of climate change is needed.

Biological research is necessary to register all kinds of species inhabiting the environment. Knowledge on the biodiversity can aid decision making on the quality of life in the aquatic environment.

The role of the excess of erosion-induced nitrites in Nyabarongo water has contributed to the extinction of some characteristic freshwater species such as freshwater fish (tilapia) or insects found only in fresh waters. Tilapia have been replaced by Claria, commonly known as catfish, usually found in polluted waters.

Since the Nyabarongo river is home to a hydroelectric power station generating over 24 mega Watts of energy, it is considered crucial to the development of utilities in Rwanda. Hydrological research has both scientific and economical use.

By gathering data on environmental factos, a reliable decision making model can be developed to inform decision makers, especially with regard to the availability of water used by the various beneficiaries.

Physical and chemical conditions influence the biological condition of the aquatic environment. The impact of agriculture on the erosion of the basin as well as the presence of inorganic elements (mineral salts from chemical fertilizers or exploited minerals) could be verified.

The sampling frequency will depend on the accepted protocol. The collected data will be compared to those of the colonial period, to be found at the Royal Africa Museum in Tervuren.

"The need for local and sustainable research is acknowledged by both international and Rwandese Universities."

The Nile Research Center will provide infrastructure for both research on site as well as support research from other institutions – providing measurements and local support.

The Nile Institute is equipped with a pontoon, providing easy access to boats sailing the river.

We use cookies on our website to give you the most relevant experience by remembering your preferences and repeat visits. By clicking “Accept”, you consent to the use of ALL the cookies.
Do not sell my personal information.
Cookie SettingsAccept
Manage consent

This website uses cookies to improve your experience while you navigate through the website. Out of these, the cookies that are categorized as necessary are stored on your browser as they are essential for the working of basic functionalities of the website. We also use third-party cookies that help us analyze and understand how you use this website. These cookies will be stored in your browser only with your consent. You also have the option to opt-out of these cookies. But opting out of some of these cookies may affect your browsing experience.
Necessary Always Enabled
Necessary cookies are absolutely essential for the website to function properly. These cookies ensure basic functionalities and security features of the website, anonymously.
Functional
Functional cookies help to perform certain functionalities like sharing the content of the website on social media platforms, collect feedbacks, and other third-party features.
Performance
Performance cookies are used to understand and analyze the key performance indexes of the website which helps in delivering a better user experience for the visitors.
Analytics
Analytical cookies are used to understand how visitors interact with the website. These cookies help provide information on metrics the number of visitors, bounce rate, traffic source, etc.
Advertisement
Advertisement cookies are used to provide visitors with relevant ads and marketing campaigns. These cookies track visitors across websites and collect information to provide customized ads.
Others
Other uncategorized cookies are those that are being analyzed and have not been classified into a category as yet.
SAVE & ACCEPT